Hybrid Systems is excited to announce it has been selected to work with ATCO at Australia’s first green hydrogen hub known as the Clean Energy Innovation Hub (CEIH) at its facility in Jandakot, Western Australia. The CEIH incorporates the production, storage and use of hydrogen, as well as the commercial application of clean energy in micro-grid systems. The CEIH will integrate ‘green’ hydrogen produced by water electrolysis – using solar energy to separate hydrogen molecules from water. The hydrogen will be captured and injected into a micro-grid system at the Jandakot facility.

ATCO’s $3.5m CEIH project is supported by the Australian Renewable Energy Agency (ARENA) through a $1.6m grant. ARENA is working to accelerate Australia’s shift to an affordable and reliable renewable energy future, by funding projects and sharing knowledge that drive innovation and commercialisation of renewable energy technologies.

The chance to work alongside ATCO whilst bringing together so many different sources of energy to produce Hydrogen through the combination of gas generation, solar and ABB PowerStore is an exciting prospect for an sneak peak of what the future holds. Well done to Australian Renewable Energy Agency (ARENA) and especially to ATCO Gas and the team. 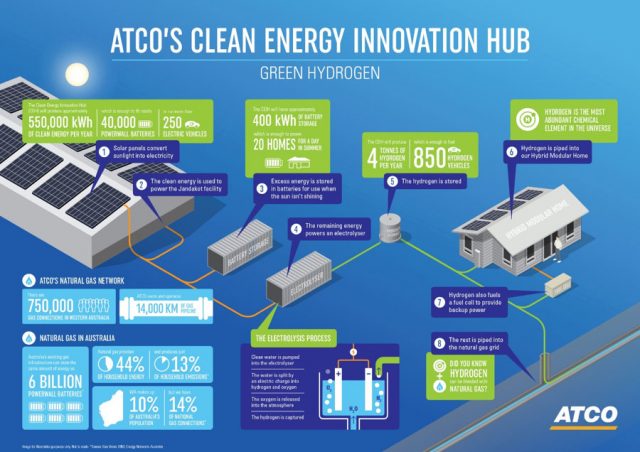 Feel free to contact us if you wish to have a Hybrid Energy Solution installed. Contact Us Now